If you ever wondered what all those dots and dashes are for on Scandinavian words then the name of the town in Sweden Dido and I are soon to move to might help.

Jönköping without its umlauts (or “umplaghs” as Dido refers to them) looks fairly straightforward to the English eye. Jonkoping instinctively, phonetically looks like it should be pronounced “John-coping”, but the presence of the umlauts immediately sets alarm bells ringing. You just know that “John-coping” is wrong with the result that you find yourself instinctively “accenting” the word. However, unless you are familiar with “Northern Germanic” languages the chances are that instinctive accenting will be wide of the mark.

In my case for instance, before I knew better, I found myself pronouncing it something like “Jern-kerping” whereas after being corrected by a helpful Swede I was told to pronounce it more like “John-shopping”. Of course, “John-shopping” is only an approximation of the correct Swedish pronunciation, but it does at least indicate the effect of the umlauts.  Moreover, since I’ve been using it, the constant stream of polite corrections from dismayed Swedes has ceased.

The one thing all our new Swedish acquaintances have told us is that our ability to pronounce Swedish words correctly, including Jönköping will improve over time.

Whether or not we have sufficient time in Sweden to master Swedish enunciation will depend upon how well Dido’s new tenure at Jönköping University works out. As things stand she’s planning on this being her professional swansong, but even at 57 this still leaves us with plenty of time – potentially…

Far more accessible than Jönköping’s correct pronunciation is its pleasant geography. The town is situated on the banks of Sweden’s second largest lake, Vättern (yes, another umlaut, and no, I haven’t been informed yet and all guidance welcome) and during our recent visit I manged to get some striking images of it, and the natives enjoying themselves along its beach.

One of the things that I’m falling in love with in Sweden, and something I already miss when I’m not there is the astonishing crystalline light and the startlingly vivid colours and tones it produces on everything it touches. These pictures illustrate this pretty well… 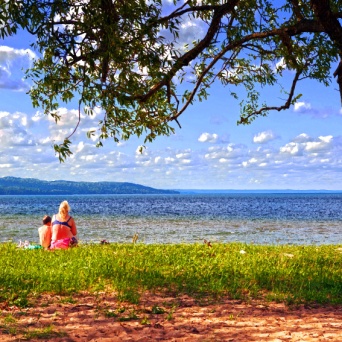 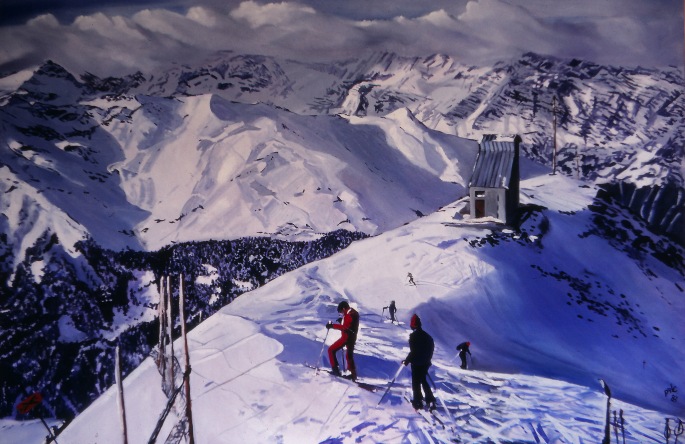 Not drawing – I really don’t miss drawing at all – nor watercolouring, or working with gouache or pen and ink, or even small and regular size oil painting. But once in a while I miss the thrill of that rarest of moments, when I almost felt like a genius, and for some reason this only happened to me when I was working on an epic scale.

I experienced the feeling just a handful of times in the thirty years of painting big canvases. It was normally sparked off by a single brushstroke when, just for a millisecond the brain achieved total control over the brush with the resulting daub a near-perfect expression of the thought behind the action.

Normally, these experiences and daubs occurred toward the completion of a painting, and were all the more satisfying for underlying the fact of conclusion – something rarely guaranteed when making any work of art.

I remember one such daub being a fleck of white light on the shoulder of a girl walking into a heat-hazed distance, and another being a splash of red, of a Coke can littering a pavement.

But of all the special daubs I ever applied to canvas, only one painting contained more than one, and this is that picture below, called Bormio 3000.

It’s particularly remarkable because unlike all the others which were “free works”, Bormio 3000 was a commission, and because of who it was for, and what they were paying me, it was painted under considerable pressure.

The patrons were a married couple who owned a successful commercial art gallery in London, and they wanted an extremely large skiing – themed oil painting to decorate the main room of their new chalet in Verbier. Moreover, they were paying me the largest sum of money I had ever been paid for my work – several thousands of pounds.

Somehow, and for whatever reason, the painting was a huge success, pleasing both the patrons and for once, the artist too.

Even more unusually, I like the painting as much now as I did then, when “special daub” after “special daub” seemed to flow from the brush as easily as breathing.

Bormio (unlike Swiss Alpine Verbier) is  in the Italian Alps, and “3000” refers to altitude (in meters) at the top of the run, pictured in the foreground. The painting was about 5 by 7 feet and when I look at it now, especially the portrayal of the far mountains and clouds I have not the faintest idea how I achieved it.

The term “masterpiece” is obviously a relative one and normally, highly subjective. However, based purely on Adam Green terms, so far as I am concerned, both in the summer of 1983 when I completed Bormio 3000, and now, 34 years later it remains the work of which I am most proud. It hits the mark in every department; tone and colour control; composition; light; drama; and near-perfect brush-work. All-in-all, not a bad conglomeration of “special daubs”…

My Tweets
Join 184 other followers