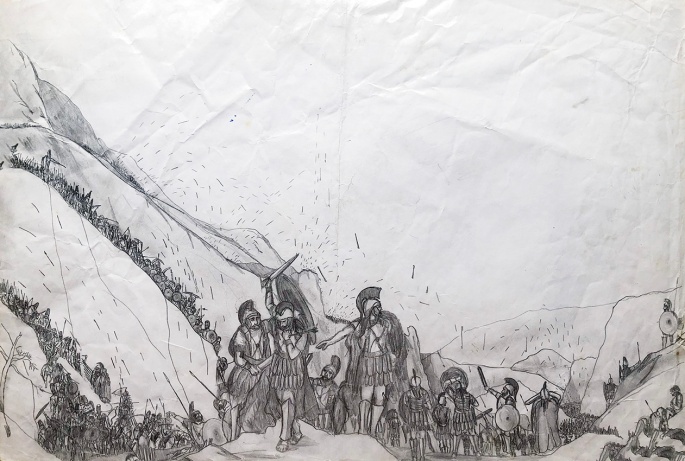 I first saw the film, The 300 Spartans when I was seven-years-old, and (as I’ve mentioned before on this site) it determined the future course of my life, both as an artist, and an amateur scholar of ancient history. So fascinated by the story of Leonidas, one of the first books I bought was the Penguin Classics edition of Herodotus’ Histories , which in turn opened up to me the historical context of not only of the Battle of Thermopylae itself, but the whole concept of the sadly eternal battle between freedom and tyranny.

This is written with the presumption that all of those reading it are aware of the basic story of the battle (even as depicted in the more recent and bizarre movie, 300) and the fact that although Leonidas and his tiny army were overwhelmed, their heroism inspired Greece onward to eventual victory over the invading Persian empire. With the passing of time, the stand of the 300 at Thermopylae became a metaphor for freedom defying tyranny, so poignantly exemplified in the stark words of Simonides’ epitaph to the fallen Spartans; “O stranger, go tell the Lacedaemonians that we lie here, obedient to their words…”

Bearing in mind numerous powerful caveats; including that a) most of our free “western societies” today are hardly comparable with ancient Sparta (or any of the other Greek states), and that b) Xerxes had no nuclear option to fall back on when his invasion plans went awry, the lesson of Thermopylae has rarely seemed more instructive.

The big question remains however, if Kiev is a modern-day Thermopylae is the West prepared for a Salamis and a Platea?