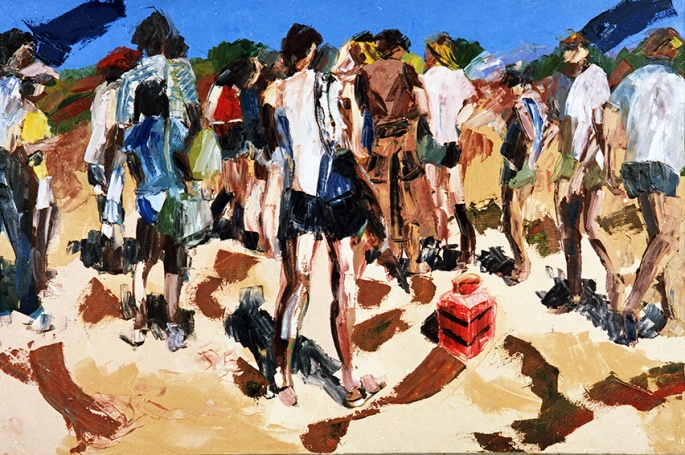 The “problem” of figures in landscape fascinated and challenged me in equal measure. After all, without the notion of a literal narrative theme to the picture, the human figure always seemed to be merely an additional element – actually part of the landscape that she/he inhabited. This was not to depersonalise the figure so much as to find a way to harmonise all the elements of the image, whether vegetation, rock, sky or/and living figures.

From the time of the Impressionists onward, artists have found increasingly ingenious – even gimmicky – ways of resolving the problem. Artists like Renoir and Monet would blend their pictorial elements through a uniformity of paint daubs, and later, Seurat by “distilling” those daubs into dots. Then, Picasso and Braque contorted and warped their figures into the very space they inhabited, leading finally to Matisse, whose contrary method was to turn everything into a jigsaw of flat shapes.

My earliest representational combinations of figures with landscape in oil paint were none of the above, but both romantic, and traditional, whereby the figures inhabit their environment rather like actors on an enormous stage. And, while this was great for creating a form of visual counterpoint and deeply spatial scenic drama, it ignored the potential of the paint itself for creating a vivid, “living” surface.

I must have painted dozens of such “theatrical” images when one day, I was confronted by a sketched ground for yet another scene of young people in Israel, and made a change of plan. It was a simple thing really, but with exciting consequences for the evolution of my art. I simply put down my brushes and picked up my favourite, medium-sized, trowel-shaped palette knife, and made the whole finished painting with that instead. The resulting picture was a revelation to me, with the paint, and the surface of the canvas elevated from a means to a pictorial end, to the end itself. In the process, the figures were transformed from “actors on a stage” into animated, vibrant entities, at one with their landscape. Suddenly, my pictures, and the figures within, looked alive.

Looking at these pictures now, with objectivity borne of time and distance, the significant influence of Impressionism is hard to dispute, yet my own, innate Expressionist instincts are equally evident, and even now, that still gives me a tingle of excitement and pride. Ultimately, they’re not half-bad, and that is all that really matters.

…AND HOW I DERIVED SOMETHING POSITIVE FROM OUR MOST NEGATIVE EPISODE

The past twelve Covid-19-infested months included, by far the bleakest time my wife Dido and I have shared together was our enforced eight-month sojourn in Boulogne-Sur-Mer, back in the early 1990’s, described in earlier posts ( here and here).

Yet, few circumstances, however dire, are so unremitting that they totally lack the odd moment of emotional uplift. And for us, in Boulogne, these moments were generally provided during our regular weekend strolls across the local beach.

The proverbial bracing sea air (even when tainted by the odours emitting from the local fish cannery on the southerly breezes); the angry waters of the English Channel, inky blue-black beneath a vast sky of tumbling clouds; distant rain squalls appearing like grey curtains drawn across the serrated horizon; and shafts of silver sunlight occasionally breaking through the blanket of cumulous like spotlights illuminating a white flecked, cobalt stage in perpetual motion – all conspired to blast us temporarily from our glum mental state.

In a way similar to how blues music comforts and eases the spirit, by both reflecting back, and articulating the nature and source of the angst, so those tumultuous blue-tinged scenes reminded us of our innate love for life and the adventures it offers. The three palette-knifed oils here, painted a year or two later in my southern Spanish studio, celebrate those precious moments that gave us the reason and the energy to persevere. A particularly apposite recollection I think for these troubled times…

One of the many surprises thrown up by my recent digitisation of all my photographs of old artwork was how – once chronologically sorted – it vividly revealed the development of my painting skills – or, if not skills exactly; at least of my comfort with the medium of oil paint. Additionally, they exposed something even more interesting – at least to me – of the dramatic alteration in my spirits and emotions from that heavily pressured time at art school to my days as a confident, free painting spirit.

The two paintings I have chosen for this piece graphically illustrate what I mean:

Soho Buildings was the first painting I ever made on canvas, and how it shows! Thin washes, tentative drawing and clumsy composition. Looking at it now, even in photographic form, I can still feel my fear of the canvas, and my hesitant application of the paint. Plus there was the added pressure of being surrounded by – at least – equally talented artists, most of whom were already familiar with painting on canvas. So, I was desperate for it to appear like I knew what I was doing and that I was at ease with the process, which clearly shows in the picture. But, for all that, the painting has some merit; some lucky accidents; like the two white painted windows on the shaded side of the near building…something quite lyrical about them. Plus, it serves now as a powerfully symbolic and accurate reminder of my gloomy mindset during those first terrifying days at Saint Martin’s…

Girl Fastening Sandal was painted in 1988 and is evidently, everything the Soho picture is not. By this time I was confident and comfortable with both the oil paint and the painting surface and, more crucially, unencumbered by being part of any “art scene” – I didn’t have to worry about peers and rivals watching me over my shoulder. Whereas, with the Soho painting it was all I could do to produce any kind of image on the canvas, with the Girl painting I was preoccupied with expressing the joys and thrills of both the subject and the paint itself. It should look almost as if the paint flowed directly from my mind to the palette knife; a visual stream of consciousness; like a happy, joyous thought. The two paintings here graphically represent a pretty dramatic 10-year transition from student to artist and from teenage hesitancy to adult assuredness.