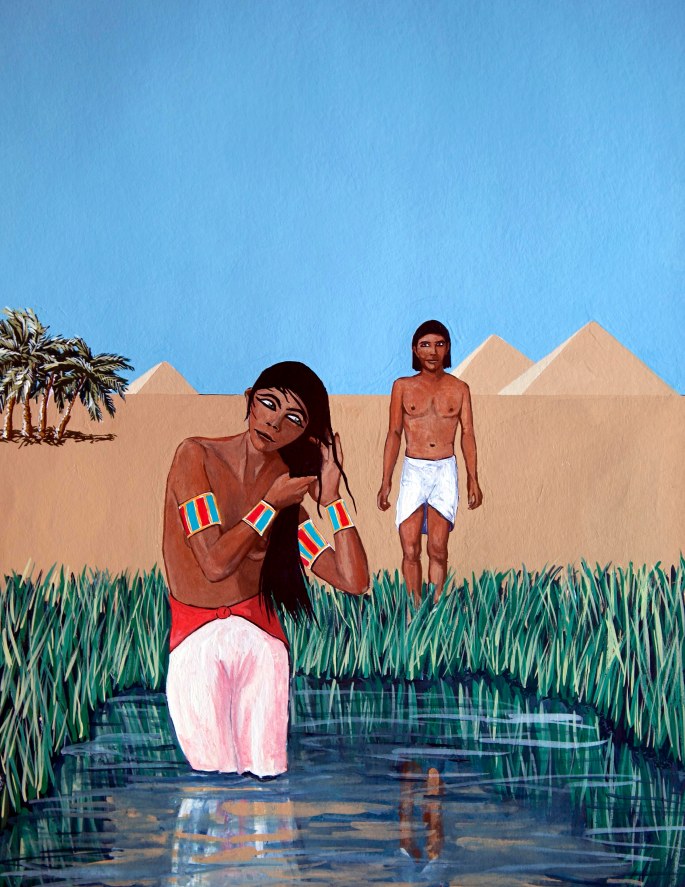 Here are the second batch of illustrations.

And yes…as one or two of you who know us have noticed, Dido and I (plus a girlfriend of Dido’s) were the models for most of the characters portrayed. Much hilarity was had by all during the photography and as for the photos themselves – well, they’re indescribable! But that’s another story…

As an illustrator my most lucrative commissions, pro-rata, were for advertising agencies. I rarely earned less than the equivalent of £500 per day  and often considerably more than that, and this was back in the 1980’s. But there was a catch; a burdensome and irritating trade-off, which was having to deal with the agencies themselves and especially the members of the “creative-teams”. These “creatives”, often genuinely brilliant and yes, creative, young people were, more often than not, hampered by their competing egos, their manufactured passion for the job at hand and their -oh-so-cool agency “patois” made them highly ineffective givers of briefs.

Briefs were generally muddled and unclear, and always – but always – the artwork was required yesterday at the latest. I can honestly say that in the dozen or so jobs I did for agencies I can’t recall ever being entirely sure of what I was supposed to be doing, and nearly always having to do it through the night to have it ready for the courier the next day.

By contrast, although book covers could also pay very handsomely, for most book illustration work one earned peanuts – On one particular job for Cassell Illustrated I had to do a finely drawn and coloured pen and ink reconstruction of a Templar castle. The research, acquiring of photo-reference material and actual making of the picture took me the best part of three weeks. I was paid the grand total of £150! But despite this I nearly always enjoyed the work. Most publishing house art directors were – or had been – illustrators and artists themselves and had had an instinctive knowledge of how to give clear and lucid briefs. Similarly, time was never a major issue, being determined more by the scale of the illustration job itself rather than purely commercial considerations.

One such job in the summer of 1998, which turned out to be my final excursion into illustration, was something of an epic. I was commissioned, again by Cassell Illustrated to make a series of 16 gouache colour plates to front each chapter of a book called “Mythical Lovers”. The author, Sarah Bartlett, was/is a well-known astrologer who had compiled and written a coffee-table history based around 16 ancient and iconic love myths from around the world.

After the job was completed and I had been paid I left illustration for good, and rarely gave Mythical Lovers another thought. And because I no longer required a portfolio  it was the only job for which I never received or asked for finished copy.

Then the other day, I was going through the drawers of my old plan-chest here in Spain and I came across my original gouache plates – all sixteen of them, and in a state of perfect preservation, and thought what a curious subject they would make for my next “gallery” post.

I’m showing them in two groups of eight and I’d be interested to know what people think of them. For me, it’s a reminder of just how versatile one had to be as a commercial illustrator – the “session musicians” of the visual art world…