Photography has played an ever-growing role in my picture-making since the first day of the second term, of my second year at Saint Martin’s School of Art. It was a bleak winter’s day in 1980 and I remember feeling particularity depressed about the direction – or lack of direction to be precise that my painting was taking. For the past four terms at the school I’d walked a wobbly tightrope between the pressure to emulate my tutors’ abstract expressionism, and my own innate passion for making representational images. The resulting stream of paintings echoed this dichotomy, rarely convincing as abstract or figurative; more often than not, a clumsy, unresolved mishmash of the two forms. If, as occasionally happened, I turned out a pleasing picture, it was always more by luck than by design, with me clueless as to how or why I had achieved this.

Then, on that winter’s day in 1980, while I was pacing back and forth, dreading the coming weeks and months, a new tutor called David Hepher walked into my studio space, and my art career was changed forever. David, unlike all the other tutors at Saint Martin’s was a figurative artist and to this day I have no idea how he came to be teaching there, but for me, his sudden appearance was as timely as that of an Old Testament angel. I distinctly recall his expression as he first set eyes on my paintings – large canvases full of expressively, heavily painted figures of young people hurtling boldly through a romanticised Israeli landscape.

A warm quizzical smile came across his face like that of someone unexpectedly bumping into an old friend. Then I remember that he sat down on my rickety paint-spattered moulded plastic chair. During the previous four terms at the school not one tutor had ever smiled this kind of smile when looking at my pictures, let alone sat down in my space. By the end of the ensuing conversation it became apparent that he was almost as relieved to see my work in that school, as I was thankful that he was now teaching there.

The first thing he asked me was who my favourite artists were, and when I said Vermeer and Hopper he looked curiously at my wild and frenzied pictures. He then reminded me of Vermeer’s reliance on the camera obscura for achieving these perfectly painted captured moments and asked me why I didn’t use my own photos in a similar fashion?

While I’d already been using photographs for the past year or so as a form of rough reference, in the same way I worked from my sketchbook, David convinced me  to try something “bolder”, in his words, but hugely controversial; especially within such a temple of conceptualism and abstract expressionism as Saint Martin’s. He suggested that I take my favourite photographs and copy them as faithfully as possible in oils, like huge painted photographic enlargements. He felt certain that in this way I would find the inner artistic peace I was craving.

And cutting a long story short, David’s empathetic advice proved successful, even though the pictures I went on to produce with this new method ensured that I would prove even more of a problematic enigma for most of his colleagues. Presented here are several of the large canvases I painted as a direct result of David’s tutelage. Some them have appeared on this site before, but never side-by-side with the “offending” snaps!

Stick a building – any building, on the edge of the land, where it meets the sea; on a sunny day, beneath a vast dome of blue sky, and something magical happens. Colours seem more intense; shadows seem darker; and tones seem more dynamic; making – often humble – utilitarian structures appear like architectural masterpieces.

During my many years of travel I’ve often been struck by the allure of these sun-kissed lumps of timber, steel and concrete. And without further ado, presented below are a small selection of those I was fortunate enough to be able to record in photograph. 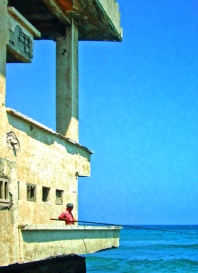 My Tweets
Join 183 other followers